You need Adobe Flash Player to play Gumball Disc Duel.Click to use Flash 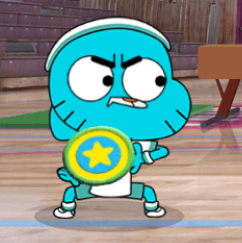 Gumball Disc Duel is a super-sized air hockey game. In this game, you will play as Gumball, Darwin, Patrick Fitzgerald, and many others in the Elmore gang. You can play in two modes, alone or with two players. You can play against a computer-controlled opponent or against your friends using dual controls.
At the start, you choose your hero and your game mode. Your task is to take throwing a large disc, block the incoming disc, and try to throw past your opponent. You need to score more points than your opponent and throw the disc smartly. You can use curl it, bounce it, and even do a special power throw to bamboozle your opponent. You need to move your character to protect your target and throw discs when it's your turn to shoot. Remember that each match has a time limit and you have to score as many goals as you can and be better than your opponent. And finally, you need to score more points than them to progress to the next round.
Play with Cartoon Network's cartoon characters and try to become the air hockey champion in the game. Have fun