You need Adobe Flash Player to play The Last Ninja.Click to use Flash 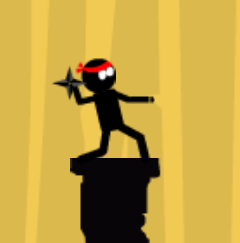 The Last Ninja is an exciting Ninja game. Every Ninja warrior has to go through harsh training. With innovative gameplay, you will experience and know the magical skills of the Ninja. The Ninja's mastery of weapon making and mind control makes you wonder and want to learn about them. But the Ninja clan was taken by the evil Ashikaga clan, led by Kunitoki, who assembled an army of otherworldly spirits to ambush them. Little does Kunitoki know, that Armakuni (the last ninja) has survived and will soon take revenge.
You throw ninja stars at other ninjas in this epic fighting game. Throw quickly and accurately so your opponent doesn't have a chance to shoot back. You can walk in four directions, jump, fight enemies and collect necessary items along the way. While fighting, the ninja can use various attacks and blocks. There are several weapons to find, including smoke bombs and shuriken. The graphics are really nice and combined with the music created a really great atmosphere. Get headshots for bonuses that you can use to upgrade your health and strength.

Use mouse and left click to aim and throw.