You need Adobe Flash Player to play Bloxd.io.Click to use Flash 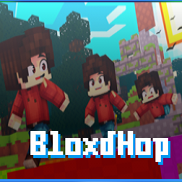 BloxD.io is a multiplayer 4D game on the Minecraft platform. In which you have to jump from block to block, your task is to successfully get to the end of the path. The yellow blocks are control points, so try to reach them to respawn right there in case you fall. Don't forget to earn money to buy very useful upgrades, such as speed boost, double jump, or jump boost, that will definitely make you reach a lot further. At the start of the game, you can choose one of three modes to play: BloxdHop.io, DoodleCube, EvilTower. You can complete some ongoing quests in BloxdHop io to get extra XP points. BloxdHop io can be played solo, with friends, or with online players worldwide. In DoodleCube, you build to create objects based on themes. EvilTower is a parkour game with a quest to reach the top. This game mode is inspired by Roblox's Tower of Hell. Have fun.

Use WASD to move.

Use Shift to run.

Use Space to jump.